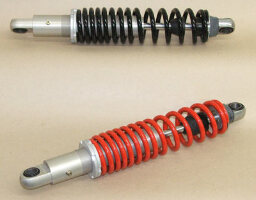 The new 7614 series motor cycle shock absorber from Ikon Suspension takes the best of the 7610 series features and adds a light weight aluminium body with a screw thread type pre-load adjustment for the spring and gas pressure just to top it off.

7614 has the same 4 position rebound damping adjustment feature found in 7610. This provides the rider with useful handling options ideal for road and track. The tradition of rebuildability and re-valveability continues in 7614. Many of the parts are interchangeable with 7610 which means the new series does not have to cost an arm and a leg and is economical to work with short and long term.

7614 has many potential applications. Almost all 7610 series shocks can be made as a 7614. Whether it be a street bike needing a high tech look, a vintage road racer, speedway rider or vintage motocrosser chasing the clock 7614 series shocks are there to provide affordable performance for all. 7614 has also found a useful place for a limited number of mono shock applications. In particular they have found ready acceptance on older K75, K100, K1100 and R series BMW’s.

As Ike says; Bike On With Ikon!